Samsung’s Return of the Galaxy Note, Note 8 that is

The Galaxy Note is finally back and was unveiled at the Unpacked 2017 event in NYC last week. The new Note 8 aims to put to rest all of those nasty memories of exploding Note 7‘s. In classic Samsung form, the Galaxy Note 8 is a feature stuffed device that is sure to help you make the most of your day. Let’s take a closer look at the Note 8.

The Note 8 features a 2.3GHz Quad + 1.7GHz quad 64-bit 10 nm processor. Typically each phone company will offer different hardware for different regions and carriers and the Note 8 is no different.

Unfortunately we do not often see the bleeding edge CPU’s integrated into the phone here in the USA. Many companies offer a faster and slower CPU sometimes with different amounts of RAM. We are pleased to write that the Octa-core CPU‘s only differ marginally as far as the numbers game is concerned; the faster CPU is a 2.35GHz Quad + 19GHz Quad 64-bit 10nm CPU which will probably only be initially or ever available in Korea as it historically goes.

Along with the Octa-core CPU we are also very happy to list that Samsung has included 6GB of LPDDR4 RAM as well as a microSD card slot that can support up to 256GB of additional storage memory. A convenient reversible and fast USB type-C connector is built into the device so if you don’t have any Type-C cables laying around yet, time to start swapping in the new.

If you own a Galaxy S8 or S8+ and you want a larger screen the Note 8 aims to please with it’s increased real estate; The Note 8 sports a HUGE 6.3″ Quad HD+ Super AMOLED screen which displays at 2904×1440 resolution at 521 ppi. Up from the previous 5.7 in on the Note 7. With the increased real estate there’s also increased viewing area with an 18.5:9 aspect ratio that allows you to see more of the scene.

Engineered with Samsung’s Infinity Display extends that beautiful screen so it spills over onto the sides of the phone and a fully edge-to-edge, nearly bezel-less viewing experience when you are looking at it straight on.

Quad HD screens are great, right up till the point where you need battery life. Since the Galaxy Note 8 is equipped with a smaller battery at 3300mAh, the battery life can certainly be an issue for many depending.

The Note 8 allows you to toggle from the default Full HD+ to a fully robust Quad HD+ (WQHD+) in settings. Clearly the battery life is going to be an issue in Quad HD, but for those who would like enhanced graphics and don’t mind being tethered this should be a nice option for gamers and media.

Integrated with Fast Wired as well as Fast Wireless charging gives you the best of both convenience and speed when you need to charge up.

The Note 8 comes bundled with AKG’s Pure sound in-ear headphones and features UHQ 32-bit ultra high quality playback with DSD support for DSD64/128. The Galaxy Note 8’s Dual Audio functionality utilizes this scale-able codec to connect two bluetooth devices simultaneously with Bluetooth 5.0. This feature is “Available only for certain accessories made by Samsung.” Audio output may slightly differ between devices is what Samsung says, but what we’re skeptical about  is the stability of this function, but time will tell. 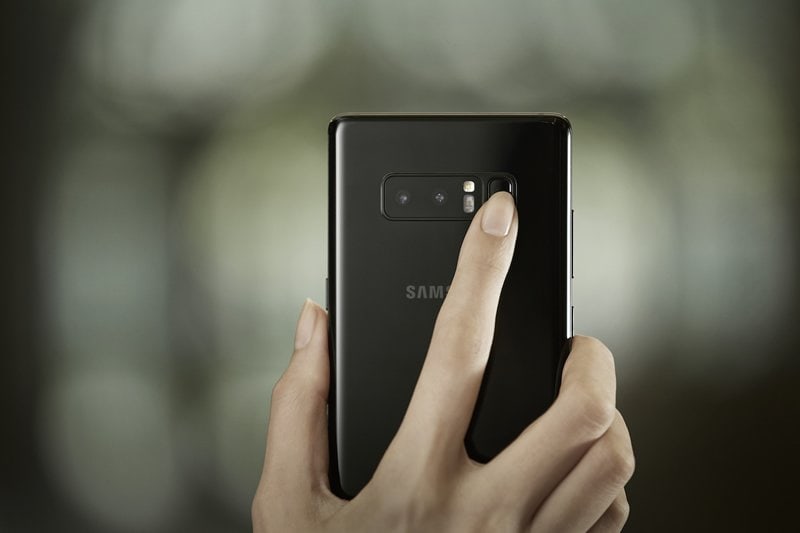 A front firing 8MP (up from 5MP on the Note 7) camera features AF and a F1.7 aperture wide angle lens at 1.22µm. On the rear we find a pair of cameras. The dual camera setup allows you to switch between a Telephoto 12MP F2.4 aperture at 1.0µm or a 12MP Wide angle camera lens F1.7 aperture at 1.4µm pixel size. The Note 8 of course is able to record 4k video at 30 fps.

The Note 8 finally makes it’s return from last years Note 7 disaster and is now available for pre-order. If you’re still holding onto your potentially exploding Note 7, Samsung is offering up $425 trade in credit towards the purchase of a Galaxy Note 8. You’ll need to purchase the phone directly from Samsung and not through your carrier. The Samsung Galaxy Note 8 will be available for purchase on September 15th in the states. The Galaxy Note 8 will be available in 4 colors initially in the states; Midnight Black, Deepsea Blue, Orchid Gray, Maple Gold with matching color S Pens.