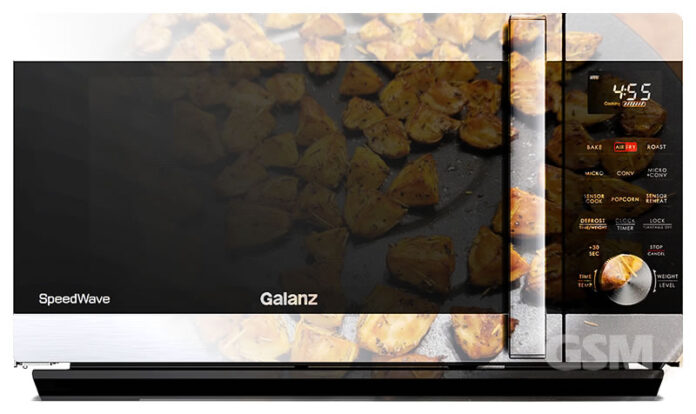 Created for convenience, the Galanz Speedwave allows you to cook a variety of dishes in a single unit. The 3-in-1 multi-functional oven features a traditional microwave, convection oven and air fryer built-in one. Check out our Galanz Speedwave Oven Review.

The 1.2 cubic ft capacity is large enough to cook or reheat meals for the single guy/girl while saving space. Use it as an alternative to your full sized gas oven or reduce your countertop appliances with this 3-in-1.

The counter top unit features a contemporary look with elegant stainless steel face that keeps your kitchen looking modern. Let’s take a closer look at some of the particulars.

The Speedwave is a countertop unit and has a standard width but you’ll quickly realize you need a little extra room in the back. Since this is also a convection oven and air fryer the oven needs a little more exhaust space than normal. During traditional microwave use the rear cage doesn’t significantly heat up. When you use the convection or air fryer the rear of the unit does heat up a little bit but still should be kept clear for airflow. Hot air is also expelled out slits on the left side of the unit.

The 1.2 CU foot capacity unit is slightly large but the versatility is nice. Being able to bake/roast, microwave, air fry in a single appliance is convenient in ways and does save space in that sense.

The buttons are touch sensitive so you don’t need to press them with much force. They’re pleasant to use and responsive. Comes with the 2 piece 10.6″ air fry kit, glass 12.4″ turntable and 12.5″ Baking/Roasting Pan.

The Galanz Speedwave 3-in-1 features microwave, convection oven and air fryer functionality in one countertop home appliance. Versatility is the name of the game here.

Sensor reheat was a bit of hit and miss. We spent lots of trial and error trying to adapt to the sensor settings. More often than not it was simpler to set things manually than guess what the performance of a particular sensor setting was.

Galanz has designed the Speedwave with a non-traditional button interface and a dial. After a tiny bit of getting used to the controls are easy to deal with, though not the most intuitive layout initially.

The Galanz is sans a number pad, which can make things slightly confusing at first but the number of clicks so to speak is similar. When using a traditional microwave you’d hit the time button, enter the time 2-4 pushes, then hit start. On the Speedwave you’d select the mode (microwave, convection, air fry), use the dial to set the time, and push the dial to start the oven.

It can feel a bit counter intuitive to use the combi microwave/convection setting for example. You’ll place the included metal non-stick roasting pan inside not to mention that the walls and entire interior are lined with metal. Not to worry, the included accessories or interior metal lining do not cause any arc’ing. That doesn’t mean you can leave a fork in there while microwaving. The air fry accessories should not be left inside while operating the microwave, but the roasting pan will work in the microwave setting.

There could be more fine tuning but I’m not sure that all that effort to redesign the controls to include a dial is worth it. It’s not bad, but the time and temp are in increments of 10 min so you have to adjust to the nearest time. If you turn the dial too quickly, the control doesn’t recognize the increment.

It would be extremely time consuming and nearly impossible to go through every type of cooking situation. We’ll cover some of the things we cooked and continue to update this story as time progresses.

Typically a multi-purpose unit of any kind will not perform as well as a device dedicated to a single function device. That said, overall the Speedwave performs relatively well. Baking & Convection require a pre-heat time but set your cook time and when it’s pre-heated the oven will let you know to put your food in. When using the oven, convection, roast, air-fryer it is important to remember that the interior is lined with metal. It can be easy to burn yourself if you are not careful when you reach inside. We wouldn’t really recommend this for use by young children.

Combi-cook which is microwave and convection oven alternating. Have you ever microwaved something knowing it might end up slightly soggy and then pop it in the toaster oven or panini press to crispen it up? The Combi Speed Cook setting is supposed to achieve similar results. Reheating a slice of pizza using this setting isn’t as rosy as it seems. It works but the pizza is left a bit soggy. Convection or Air Fry is the way to go to reheat.

A rather big disappointment was microwaveable popcorn. The Galanz 3-in-1 did not perform as well as a similarly powered 1000 Watt Panasonic microwave. Where the popcorn bag usually comes out almost bursting and with just a few kernels unpopped the Galanz only popped roughly 80% of the bag. It would leave 20-30 kernels unpopped no matter how many times we tried and extended the time till we reached the burn stage.

Roasting potatoes in Convection Bake the Galanz 3-in-1 shined. It’s all in the prep right? Cut, oil & season, toss and place onto roasting tray and use the pre-set. Press the convection button twice to get the pre-set settings, rotate dial and start the oven to preheat. Roasted potatoes can take some time in the traditional oven to be cooked through and not char burned. The preset setting worked great! The potatoes came out perfecto! The key is all in the prep and making sure the potato wedges are smallish and evenly cut.

The Speedwave does relatively well at reheating food using convection or air fryer modes. There is a distinguishable performance difference between a dedicated air fryer and the Galanz Speedwave when it comes to air frying; an inexpensive bucket style Dash Air Fryer out performs the Galanz Speedwave in the Air frying dept hands down.

We felt the convection feature works best with regards to the oven functionality. Roasting did work but perhaps due to the confined interior space has a tendency to cook the exterior of your food beautifully but may be undercooked inside. It’s best to go slow and low in many cases.

Still the Speedwave 3-in-1 performs decently but provides some versatility in a single unit. This perhaps may work best for a bachelor pad scenario or single person dwelling where you might be short on space and might be making food for 1-2 people. Although the unit seems relatively safe, we would not recommend this oven for households with small children.

The Galanz Speedwave 3-in-1 is a nice looking multi-function countertop appliance that comes with microwave, convection and air fryer modes for convenience. As with most things, a dedicated single use product will tend to excel at that one task; conversely any multi-purpose unit that has more functionality typically performs those various things less effectively. The Speedwave is no different. It will perform a multitude of things pretty well, none of them really great.