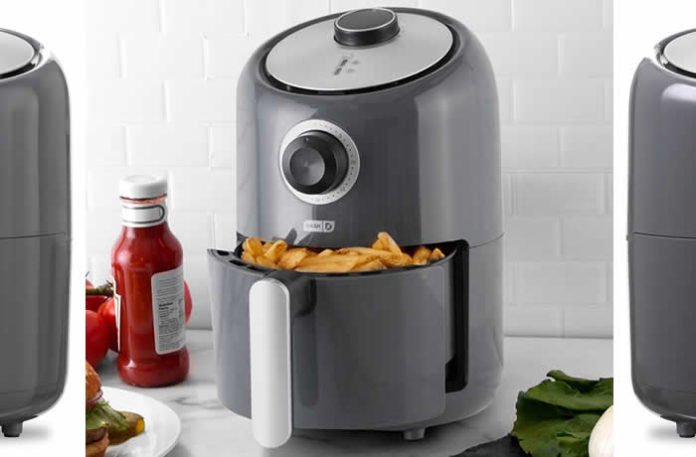 Finding healthier ways for your family to eat can have a significant impact on your life and quality of life. The Dash Compact Air Fryer uses AirCrisp technology to quickly and easily make fried foods without the need to keep a vat of oil on your kitchen countertop.

Keeping a deep fryer around isn’t always the healthiest option since you should probably limit the amount of fried foods you are eating. Over a lifetime, it can lead to high cholesterol and heart problems not to mention just the smell of oily air can be enough to make you feel sick. Air frying reduces added fat by 70-80% without sacrificing flavor.

This is a convenient small appliance for your kitchen that works well in the bachelor pad or for a single resident. Provides 1000 Watts of power to quickly heat up to cooking temperature.

The Dash Compact Air Fryer isn’t really a fryer and uses the same premise as your full sized or toaster convection oven by adding heat and using a fan to circulate that heat to cook and crispen up your fried food without the need to add oil into the mix.

We are pretty pleased with the results and the 1.7L size makes for a great cooking appliance for the single guy or even small family. It takes up less counter space than a traditional convection oven and cleanup is quite easy since the cooking tray/drawer is dishwasher safe. Simply let the tray cool off sufficiently and toss it right into your dishwasher top rack.

Using the Dash Compact Air Fryer is about as easy as it gets and though it operates very similarly to a convection oven, the heat is generated almost immediately and there’s no waiting time for the oven to get up to temp, so in that sense it does seem to prepare fried foods faster than using our oven.

Even after wiping off the interior with lightly soapy water and a paper towel as well as washing the tray with soap and a sponge, on the first run, it gives off a plasticy odor which can be a little concerning. On the second run we didn’t really smell anything except the food but now we’re noticing the smell again. We’ll keep using it and see if that odor persists and report back in time.

Other than that, we’re not entirely sure where to place the tray to cool off except back into the Air Fryer, we just try and leave it open a tiny bit for the existing heat to escape. The metal basket conducts heat very well so it cools off relatively quickly too.

We tried cooking up some typical fried foods we eat, frozen french fries, frozen chicken nuggets and frozen fish sticks we were very happy with the results. As with any convection oven, you’ll want to set the temp properly; too low and it will take longer and ultimately dry out your food, too high and it will burn the outside and the inside won’t be as hot as you want it to be.

There’s not a lot to it really and rightfully so, this is about convenience and speed right? Armed with two linear analog style dial controls; one for the temperature which goes from 0-400 degrees F and the other a timer dial that provides up to 40 min of cook time. Other than the two dials there’s just a pair of LEDs that tell you when the unit is on and when it’s generating heat. The upper LED will toggle on and off as the heat is being generated while the other lower LED power light is static on or off. The Air Fryer also automatically shuts itself off once the timer finishes.

The capacity isn’t huge but it’s plenty good for cooking up a batch of french fries.. Works well for fries, nuggets, fish sticks, onion rings, chicken wings, friend chicken, spring rolls, crab rangoon etc. Excellent for reheating fried foods and leftovers from the restaurant. A removable round tray with holes in it keeps the food off of the bottom of the cooking area and allows the air to be circulated underneath the food. You can even bake in this thing.

An instruction manual provides some general temps and times though you don’t really need it to operate the Air Fryer. There are some good tips and maintenance guidelines to read for good measure but as with a regular convection oven you want to back the temperature off a little from what the instructions say on the bag. You’ll also want to follow the instructions as far as providing a quick and gentle shake once or twice during the cooking process depending on what you’re cooking.

Though you can definitely cook mozzarella sticks, you’ll want to keep the times low and check it since even in a conventional oven mozzarella sticks cook relatively quickly and before you know it you’ll have cheese oozing out of the breading.

Homemade fries and potatoes wedges do require some oil but just a 1/2 a teaspoon and you’re good to go. Whether you realize it or not, those frozen fries usually have a layer of oil on it before it gets frozen so even if you are not deep frying it, they’ll still cook in the oven. The Air Fryer cooks it up crispy in less time.

The Dash Air Fryer makes eating fried foods a less oily on the body and in allows you to eat fried foods without having to drop them into a deep fryer where the food can become saturated with oil. The 1.7L size cuts down on counter space and is a perfect little modern appliance for the bachelor pad, not to mention the cost is very reasonable at $49.99 when compared to other more expensive AirCrisp technology fryers that can cost almost 4x that much.

The Dash Compact Air Fryer is the perfect size for 1 or 2 people and is ideal for reheating leftover fries, nuggets and any other fried foods. Dash can also cook fried foods with a minimal amount of oil and avoid submerging your food into a vat of boiling oil. Super easy to use, convenient to clean at a pricepoint that comes in well below competitors.Dash Compact Air Fryer Review: Quick, Crispy, Diggin it