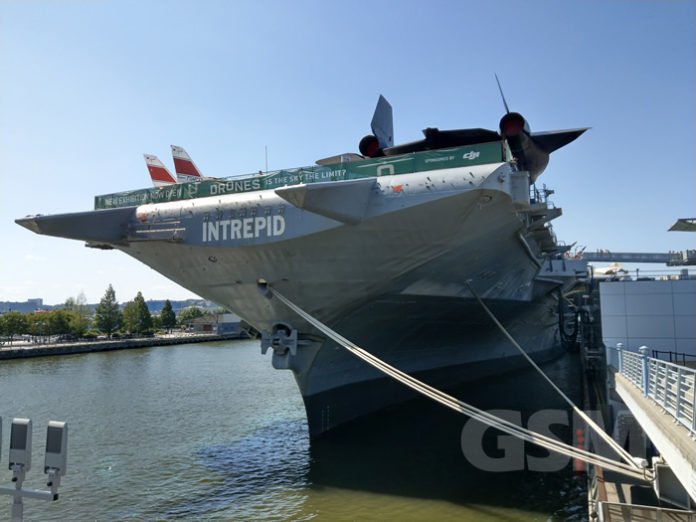 Whether you’re visiting NYC as a tourist or live/work/play here, the Intrepid is a cool landmark in the city that everyone should experience. The aircraft carrier itself is the museum, how cool is that? Docked at Pier 86 (44th street) on the Hudson River the Intrepid Aircraft Carrier is prominently visible since 1982. Take the day and enjoy a really fun, educational family day trip.

If you’re a local and have driven past it often, put some time aside to make this trip to the iconic living museum, you’ll have a blast. Check out the G-Force Simulator and the new Drone Exhibit and VR ride.

Ticket prices are $33 adult 13-64, Members, U.S. military and veterans and children under 4 year old are free. The Intrepid even offers an overnight stay if you would like to feel what it’s like to sleep on this military vessel. Pick a nice breezy sunny day and bring the whole family for a day of fun exploring.

It never fails but each time we visit the Intrepid, it brings out the little boy in us and before long we find ourselves enthusiastically exploring every nook and cranny of the ship we can find. So much fun and truly fulfilling to share the experience with younger children. Kids will be awestruck with the enormity of the ship and seeing a piece of living history, how can we not get behind that.

It’s all about learning & having fun doing it!

Parking isn’t too terrible. Just across the street are some parking lots/garages that will cost you the avg price, cash only. If you prefer a more frugal route, and don’t mind walking a few blocks you can park on the street for free. The cafeteria food wasn’t too bad either to be honest, pretty good even. The hot food was slightly expensive but the cold sandwich prices were very reasonable and tasted great.

You can bring food and drink with you so you don’t have to feel forced to buy food, though if you do, it won’t cost you a ton. Instead of walking across the busy West Side Highway, we recommend you take the new pedestrian bridge.

The USS Intrepid opens up multiple decks including access to the Flight deck where a multitude of historical aircraft are on display. See fighter jets, Harrier jet, Russian MiG-21 and even eat lunch outside under the British Airways Concorde on the deck of this 900 foot military vessel.

You can take a guided tour of the interior and check out the cockpit on the Concorde; a supersonic jet that could travel at twice the speed of sound and could carry up to 128 passengers. You’ll want to get there early as these are guided tours only.

The entire Hanger Deck is geared for families and children will have fun interacting with the exhibits. There’s lots of interesting facts and hands-on interactive learning time. It’s broken up into three Hangers which include attractions like the space shuttle landing simulator, sit inside a real Bell 47 Helicopter, grab a seat in the cockpit of a fighter jet, learn how to give landing signals to pilots approaching the Intrepid for a landing and much more. You can even jump inside the 4D movie experience and G-Force Simulator rides
(general admission does not include the extra attractions).

A couple of levels down in the Hanger Deck, features lots of history of the Intrepid and the Space Shuttle Pavilion which includes the space shuttle Enterprise prototype NASA orbiter spacecraft and space as it relates to the Intrepid.

If the names sounds familiar, yes NASA named the space shuttle the USS Enterprise after the the Star Trek Enterprise in Sept of 1976. Check out these young Enterprise Crew Members below.

#OTD in 1976, Enterprise was revealed in a VIP roll-out ceremony. Can you recognize any famous faces in this article? 🖖🏽 pic.twitter.com/GT5sb1pZmk

What’s great is the even after visiting multiple times, they are always renovating and from time to time opening new sections of the ship to explore. Older kids will love the freedom to stretch their legs and explore a good chunk of the ship, there are lots of sections and stairways and it’s still just as fun as it was when we were children as it is now as adults.

You can make your way up to the Captain’s bridge to check out the view, see the Officers quarters and mess hall, even check out the bathroom and imagine living on this floating city. The Fo’c’sle is the forward most section of the ship where you will see the enormous anchor chains and has been fully restored and open to the public for the first time.

You can climb your way into the Growler Submarine that resides just next to the intrepid. You’ll need to be at least 38″ tall and be able to get over the hatches yourself so very small children and elderly or disabled would not be able to get through the submarine. Wait time wasn’t too bad, about 30 min or so with a relatively full line. We suggest you get there early and visit the Submarine first as this exhibit will have the longest wait times.

Feel what it’s like to live on the Growler, check out their living quarters and get a exclusive view into the Torpedo room, Map and Navigation areas, climb over the hatches and climb up and down the steps as you tour the sub.

As technology progresses, so too does the Intrepid attractions. A new Drone exhibit located just outside/next to the rear section of the ship in the common area and features the history of drones and their development and technology.

Sponsored by DJI, AIAA, IEEE Foundation and NY Council on the Arts; Follow along with many of the quadcopters, drones and other unmanned drone aircraft that have all contributed to the progression of flight. You can even check out a VR ride where you are inside the cockpit of a drone in a fast paced race that is sure to get your blood pumping.

Although the Drone Exhibit is included in the general admission ticket, the 4D Movies, G-Force Simulator, Drone VR Simulator all required the purchase of an additional ticket.

Even if you’ve lived in the NY/NJ/CT metro area all your life visiting the USS Intrepid Sea, Air & Space Museum never gets old. Pick a nice day and spend the whole day there. Walk on the deck of the Intrepid air craft carrier, explore the Captains Bridge.