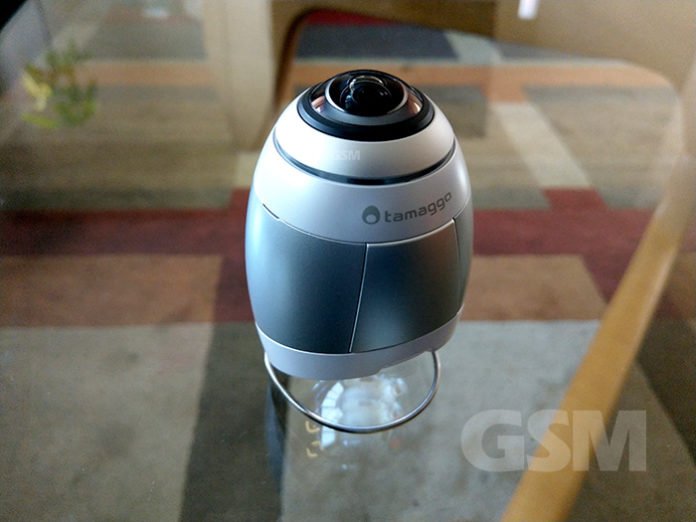 Looking to capture HD 360 video? Want to take seamless professional quality HD 4k panoramas for VR? The Tamaggo 360LiveCam is a cool little egg-shaped camera with a spherical lens that makes it easy to save life’s moments in 360 with a push of a single button. Let’s take a closer look at the Tamaggo.

The Tamaggo doesn’t actually capture a full 360 degrees in all directions. It is a spherical lens that can capture a 360 x wide angle 220 viewing angle. Most people will not need the full 360 degrees since they’re not recording for VR content. Typically 360 around you and above you is enough for capturing immersive video and panoramic photos, unless you want that extra detail for the full immersion.

Over the years there’s been a few gadgets that have donned the Egg shape like the PowerEgg – Egg shaped Quadcopter or egg-shaped chairs or even egg-shaped electric cars. The egg shape typically stands for “life” but the shape of it does more than just make you ponder the meaning of it.

The elegant shape of the Tamaggo 360LiveCam makes it easy to hold and fits in the palm of your hand. Although it can be somewhat cumbersome in specific situations, you may not want to try and juggle this while holding other things in your hands. It’s more of a documentary cam with personality to capture and share life’s special moments vs being a straight out hand-held action cam. It measures 9.5 x 5.8 x 5.5 cm (or 3.74″ x 2.28″ x 2.16 inches) and weighs 190g just a little shy of a .5 lb.

A universal camera screw mount hole is located on the bottom so you can use virtually any photography tripod or selfie stick with camera mount. The company suggests the camera is meant to be used either pointing upward or pointing downward. To do this you can simply hold it in your hand which is quite effective, mount it on a tripod, or use it on a tabletop.

The Tamaggo features a clever little stand that is integrated into the bottom/LCD screen side so you can easily set this up on a flat surface and collapse the ring when you don’t need the stand. It also comes with a little Strap ring mounting point but having this dangling from your wrist is probably not a good idea. You can however use it to tether the Tamaggo to your selfie stick so in case it spins off (however unlikely) you are covered.

Not that this has any bearing on the product quality but it was designed and the company resides in Switzerland, fabricated in China and carries a Japanese name. Tamaggo actually means Egg in Japanese.

The 360LiveCam is able to record in 1440×1440 HD resolution. Its Sony 12MP camera sensor provides crisp details without distortion towards the edges of the image. An f/2.2 aperture lens provide a total field of view of 360 x 220 degrees which gives you an immersive experience without worrying about recording footage of the ground under you. In the box you’ll find the Tamaggo 360LiveCam, silky bag, wrist lanyard, quick start guide and owners manual.

On the bottom is the Micro USB port for charging/firmware updates, a MicroSD card slot which supports up to a Class10 U3 card, MicroSD/SDHC/SDXC’s up to 128GB. The unit doesn’t come with any memory installed.

Onboard sensors include a Gyroscope, accelerometer, compass and a 1.5″ resistive touch screen for real-time reference and control over camera preferences, switching from stills to video, timeout to sleep function, battery level, WiFi connectivity, etc etc.

The Egg supports IEEE 802.11 A/B/G/N WiFi networks as well as mobile hotspot connections for connectivity. Your phone connects to the Tamaggo via Bluetooth to complete the pairing process then you’ll need to choose whether you want to connect directly to the Tamaggo generated WiFi 2.5 gHz network, if you do you’re phone will fall back on 4G for it’s connection to the web. You’ll be dealing with whatever network congestion and bottle necks are long the way if you want to livestream (to your phone) content.

Battery life is rated at 2hrs of constant recording with the onboard 1500mAh lithium which is pretty decent. We were impressed with the amount of times we started and stopped video, snapped pictures and fiddle time after an afternoon of apple picking, there was still about 22 percent power left (we did not use the app at all during outdoor testing).  If you’re planning to position this on a table, you can you run this tethered to power or with a portable battery but it can get a little hot so you might want to check it every once in a while or make sure it’s in a ventilated area if you plan on running it longer. It runs fine but when you connect for livestream/remote operation the unit will run a little warm.

The onscreen UI of the device is very intuitive to use with a low learning curve. Onscreen is 4 quadrants lets call them; Top,Bottom,Left,Right. The left right navigate through the sections, bottom to select and top to go back. The LCD screen is resistive, which just means it takes a little bit of pressure and you need to actually push lightly vs just tapping the screen. This helps avoid any accidental pressing of buttons.

It’s not very complicated with just a Power button for on/off, a large Shutter button start/stop and the LCD touch screen is all you need to operate the Tamaggo. The companion app of course extends functionality but you don’t have to use it unless you want to broadcast footage, take snaps or video remotely or transfer footage over to your phone.

The companion app for the Tamaggo 360LiveCam allows you to view in real time what’s being displayed or recorded on the device. The app supports iPhone 5+ and Android OS v5.0+, that’s Lollipop and up. You can transfer videos and still pictures to your phone for sharing or try and share out directly through the app itself. There are however some caveats you should be aware of.

At this time the broadcasting portion of live streaming video doesn’t seem to work on Android, you’ll only be presented with a message that tells you that Broadcasting is not available yet. It does however function for iOS.

When broadcasting does function, you’ll need to sign up and log into the Tamaggo servers, we suspect for buffering content before it is distributed and for more bandwidth when you share out to multiple people.

The app is a little sluggish crashes often. If you go out of the app and come back in, many  times you’ll need to reconnect the Tamaggo. Setting up the Tamaggo was easy but took several attempts. The app at this point should only be used for starting/stopping video, taking snaps remotely or viewing what the camera is seeing at that moment.

While the imagery and video is sluggish viewing over the phone, Panning around the 360 footage is fast and smooth, we were impressed with that aspect. Even though what your seeing over your phone on livefeed isn’t that great yet, the footage you are actually recording is pretty nice.

In the pictures below the camera’s orientation is full front, but you can see the quality of the imagery. The stills and video footage on a normal photo or video viewer will display round due to the 360 degree view. If you view your content through a VR enabled player/viewer you can pan around the entire 360 x 220 viewing environment and it works very well.

The Tamaggo excels as a tabletop device for local recording in 360 x 220 FOV. 360 Picture quality is excellent at HD 4k resolution. The colors are vibrant, relatively accurate with rich details that you can smoothly pan around to see. It’s a single large fisheye lens essentially and as a result there’s no stitching lines to notice because there aren’t any.

Check out some footage through the 360 viewer, Tamaggo 360 degree 4k still in Times Square NYC. The still picture quality is pretty nice, we were impressed with the clarity and performance under varied lighting conditions both indoor and outdoor. Here’s a little Tamaggo 360 degree nightclub footage in HD that you can check out through a 360 viewer as well.

HD video at 360 x 220 can be slightly bit mappy as you see some of the stretching but the quality is still pretty good. If you’re sharing this video you’ll get some choppiness, feels a little bit like a non-HD webcam. Audio recording isn’t bad, acceptable but a little flat with mono only. At least it’s recording at a decent bit rate of 190kbps at 44kHz. If you try and record at a concert or club where the music is intensely loud, yes you will get some over modulation in your audio recording.

Unfortunately for a device that is advertised as a LiveCam, the live broadcasting feature doesn’t work on Android, at least not yet. For Android it should be released within 2 weeks. Live broadcast does work on the iOS.

If you use it pointing up or down, forget about trying to use the LCD as a viewfinder since the lens and LCD are positioned front/back unless you are using the Tamaggo in a forward position for full frontal spherical pictures/video.

For as nicely designed as the Live360Cam is, the rubber lens cover seems like a bit of an after-thought. It does fit quite securely, however seems as if it could be rubbed off in certain situations but it’s not tethered in any way so you can lose it. You’re not buying the camera for the case but the lack of one can make holding the egg stressful when you are not using it. Don’t put it in your jacket pocket either unless your pocket zippers closed.

The clever little hinged ring that acts as a table stand does a great job of keeping the the Tamaggo upright on a flat surface, however if you try and secure the rubber lens cap to the camera while it’s on the table, the stand can collapse and you might be faced with an egg rolling off the table situation.