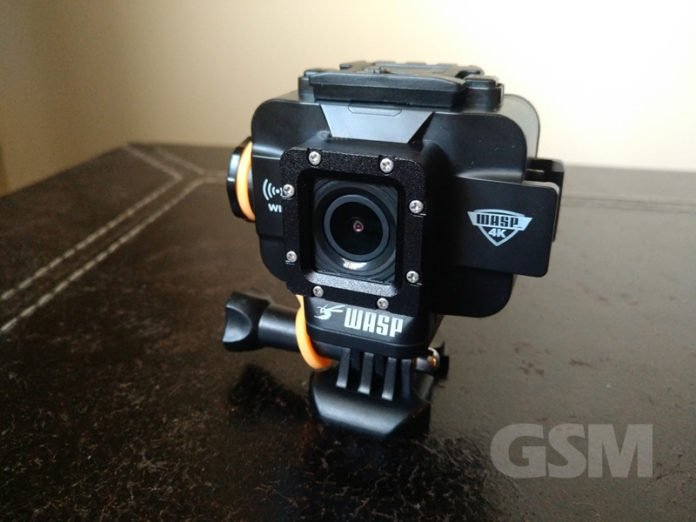 The WASPcam 9907 from Cobra features up to 4K HD video recording with 20MP resolution for still photos packed into a waterproof (to 98 ft) camera body. A 1.5″ LCD on the rear and Built-in WiFi makes it possible to edit or view and share your content with your iOS or Android device.

The WASPcam 9907 4k action cam features an apologetically rugged design. The setup is a bit bulky but relatively the same as a GoPro HERO 3/4/5 with a waterproof case on it.

The WASPcam excels at mounted applications; as a car cam, dash cam, any motorsport application such as boating/ATV/Dirt & Road motorcycles. The MSRP lists for about $70 less than the GoPro HERO 5 Black 4k actioncam, you also don’t need to buy a case for it.

The 9907 4k action camera is equipped with a 170 degree wide angle lens so you can make sure things are in frame and navigate the settings UI. A 12MP CMOS sensor and Ultra-Sharp F/ no=2.8, F=3.1mm lens with 4x digital zoom capture vivid photo quality stills and video.

White balance presets include Auto / Daylight / Cloudy / Tungsten / Fluorescent / Underwater allow you to adjust for lighting conditions depending on where your shooting that day.

The mounting accessories for the WASPcam 9907 are similar and compatible with the GoPro so you can easily reuse any GoPro mounts that you have laying around. The packaging is also very similar and is also seated on an adhesive mount in the box. The tightening screw that is attached to the camera out of the box was impossible to remove by hand. We had to use a pair of pliers to get it off.

A somewhat unorthodox simcard tray is located under the battery. You need to hook the end of it with your nail pull it towards you so it unlocks and then pry it gently out/upward. The sim card tray is hinged so when you lift it be gentle with it. It’s worth mentioning that the you should be using a class 10 card and the 9907 will support a microSD card up to 64GB.

There are some stand out features you may want to keep in mind. The 9907 is able to record 4k video at 24fps, shoot up to 20MP stills. There’s no need to purchase a case for it as the WASPcam is itself waterproof down to 98 feet or 30 meters. You can operate all of the functionality underwater, even charge it if you purchase the 6’7″ waterproof sealed charging cable. The type-A end of things will need to remain above water.

G-Sensor, motion detection, and anti-shake technology allows the WASPcam to double as your car’s dashcam; it’s able to autoloop or continuously record. You can even shoot time-lapse videos at either 1, 3, 5, 10, 30, 60 second intervals perfect for documenting activity.

If you feel compelled to share every waking moment of your life to the world the 9907’s built-in wifi 802.11b/g/n allows you to directly connect to your iPhone or Android phone to share, view or edit content. Editing on the device isn’t a practical prospect for us though simple cuts can be done, we prefer to point and shoot. Perhaps something to be done sitting shotgun on the ride home from your days excursion.

We don’t typically use the live view but it works well enough. There is a slight delay, about a half a second or so in the live video. It will of course draw more juice. You’ll want to be careful how long you tether the device as it will begin to overheat. In close proximity the onboard WiFi was able to keep us connected and live. Reconnecting is quite easy and quick in the event you get knocked off, for us not a huge deal since we don’t lean on this aspect of the device.

The WASPcam 9907 will record natively to .mp4 for convenience. A USB 8Pin, TV Out port allows you to display your HD content to an external monitor or TV. You’ll need to purchase an additional micro USB to TV OUT adapter to make that work.

The WASPcam has a 1.5″ LCD on the rear, though its not exactly easy to view due to the narrow viewing angle. You will need to be relatively close to level to the LCD to discern what you’re seeing on it. It appears to be more for general reference so you can tell what’s in frame and to navigate the User Interface and does an ok job with that in mind.

Audio was acceptable, voices and sound come in clear and is able to block out some ambient background noise. You may run into comparatively more wind noise than other action cameras that have a detachable case.

Low lighting conditions as with any camera that doesn’t have a light source image quality can suffer a bit. Stills and video can appear slightly grainy or dark under very low light as the camera increases the 100 to 1600 ISO to compensate. That said, the 9907 does pretty well with both stills and video under low or ambient lighting under the Auto ISO setting. The actioncam also features nightmode which does ok, nothing to shoot off fireworks about but it’s there.

Turning the unit on/off is relatively quick and very reliable. To turn the unit on you must hold down the power button for 3 seconds to fire the WASPcam 9907. Once the 3 sec delay has passed, the camera initializes what seems to be about a half a second. Initialization was solid each time we turned the unit off and back on again and pretty instant once the 3 sec delay passes.

Operating the buttons can be an issue, they are very difficult to push. It really takes some conscious attention and deliberate pressure to push a button with the exception of the power button and record button. The power and capture buttons do not exhibit this level of resistance and are much easier to operate.

As with any miniature action camera especially one that records in 4k, battery life is not going to be the longest. That said the WASPcam’s battery was able to make it through a good half day or longer at the amusement park this past weekend depending on how much you use it. This includes the idle time where we were trying to stay ready to record action, turning the unit on/off to preserve battery. We did most of our fiddling for settings while tethered to a power source prior to the excursion. We always travel with a portable battery pack and recharge time with a 2.4A output is quick enough to keep topping it off in our down time when necessary.

Cobra’s WASPcam 9907 4k action cam performs admirably at 2/3 or nearly half the price of the GoPro HERO 5 if you do just a tiny bit of searching. The video is clear and smooth, can shoot beautiful stills at up to 20MP and it’s waterproof to 30 meters without a case. The 9907 works very well as an interior/exterior mounted car cam and offers nice versatility to use it as your PC’s webcam or as a documentary time-lapse camera.