Samsung Gear S3 Smartwatch is going to be Huge 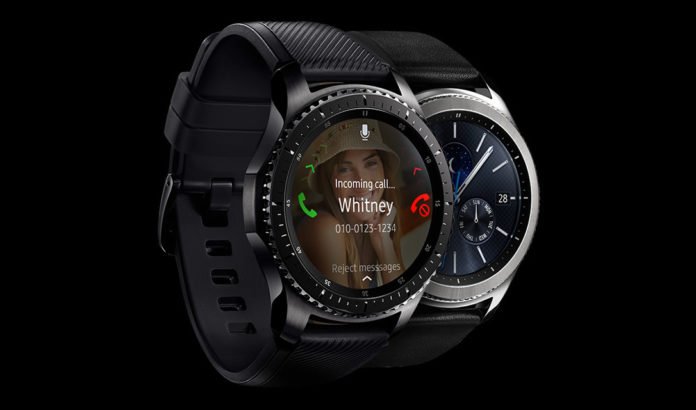 Unveiled just before the IFA Berlin 2016 show, the new Samsung Gear S3 and S3 Frontier are official and will be coming late September 2016. It’s going to be huge, or rather it already is huge with it’s 46mm diameter case and 1.3 inch SAMOLED screen.

Moving towards bridging the gap between luxury watch and smartwatch, the Gear S3 has a classic, men’s watch feel to it. The Gear S3 316L stainless steel body and familiar looking rounded buttons give the casebody that elegant look and feel like a traditional analog watch. The design is clean and simple but functional. The dial is surrounded by hour and minute increments reside on the inner bevel of the bezel; The brushed stainless steel on the bezel with ridged outter ring pairs nicely with the contrasting inner black beveled area. A size appropriate 22mm standardized band so swap em if ya got em.

The Gear S3 Frontier comes in a black brushed stainless steel casebody with a more rugged cog style outer edged black rotating bezel. Additionally the two outer physical buttons are elongated and patterned for better looks and better grip. The physical design pairs up nicely with the Chronometer style face but that’s part of the beauty, get tired of it, simply download a new dial theme and presto, you have a new look. Appropriately dressed with a rubberized standard strap, the Gear S3 Frontier’s look is more appropriate for an active lifestyle or outdoor watch.

On the inside the Gear S3 features a full color always on display that supports up to 16 million colors so that the resolution on your virtual dial can look more like a real one. The Gear S3 Frontier supports Bluetooth, WiFi and LTE service for faster data connections and file transfers, more stable streaming. The NFC equipped Gear S3 will also support Samsung Pay and is protected by Samsung’s KNOX security platform.

There’s a built-in speaker and microphone so you can make or receive calls right from your Gear S3. The Tizen OS Gear S3 and Gear S3 Frontier are powered by a dual core 1GHz CPU, 758MB of RAM and a 380mAh battery that provides “3-4 days usage with and without LTE” according to Samsung. The Battery Boost feature allows the unit to gain 10 hours of wear time with only 15-minutes of charge time in the cradle.

The Gear S3 is engineered not to have to rely on owning a Galaxy S7, Galaxy Note 7 or other Galaxy device; it is a stand-alone smartwatch that run’s on Tizen, Samsung’s own watch OS. It’s even got it’s own GPS radio (Glonass) built-in along with the altimeter, barometer and speedometer sensors. So with a little help from Samsung’s S Health watch app you can monitor your workouts, steps, calories burned, all from your watch.