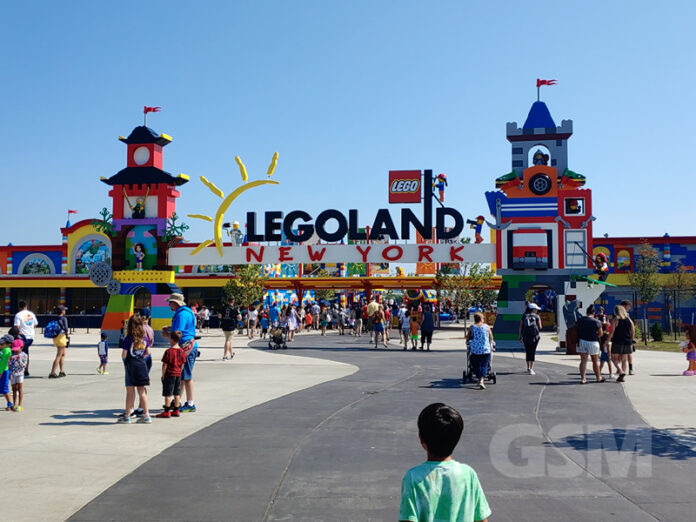 Legoland New York is finally open! Living on the East Coast you either had to travel to Legoland California or Florida or settle for a Legoland Discovery Center like in Westchester NY. The New York Legoland is the real deal and located in local Goshen NY, just a quick hop over to the NJ/NY State border.

Due to the COVID-19 pandemic the park opening was delayed about a year or more. Now that the park is open, let’s take a closer look at what’s good!

Getting to Legoland NY was really easy. From Manhattan NYC it’s just about an hour away. Just hop over the GWB and hit the Palisades Parkway to I-87 N towards Harriman State Park, then follow US-6 west to Harriman Dr and onto Legoland BLVD. The trip there took just about 1 hour from Manhattan. For those of you that are a little further away there are plenty of off-campus hotels nearby and Legoland also offers on-campus lodging and packages.

The price for entry was a little steep. For a family of 4 the cost for entry was $320.00 (2 adults & two 8 year olds) plus parking cost at $20.00 for the day. There was a ticket promotion for $50 per person but it was impossible to navigate to on the website and the only option available was the $80 per person variety.

Food and drinks were relatively reasonable, inflated yes but not to the point of ridiculousness. You probably will not be too surprised if you’re a fan of amusement parks. Water was $4, a burger was $14, slushies $5 with free refills… The stand out charges were probably the $18 slushie souvenir cup and the $25 all you can eat buffet if that’s your speed.

The park is cashless, just makes things a little safer and easier. All of the bathrooms we visited throughout the day were clean.

You’re allowed to bring in bottled water and snacky stuff with you. We stuffed the Camelbak Hawg pack with supplies and we’re good to go. It’s best to be prepared with snacks and juice boxes for the little ones for those periodic eruptions. The park is also stroller and cart friendly so plenty of parents brought mini taxi’s with them. Stroller rental is also available.

The walk from the main parking lot is very close to the entrance. Walking up to the archway the park has a nice feel, homey, family-oriented and well-manicured as you might expect it to be. There’s a shuttle service for when the primary lot is filled.

The park offers a really nice day out for the family and your little ones. Aside from the slightly pricey admission prices the day was relatively affordable for many.

It’s perfect for younger kids with a good amount of things to do for the little guys/girls that aren’t amusement park rides. A few climby role-play structures, Lego building classes, Build & Test Center, Robotic Play Center… The amusement park rides are geared for two age groups, 3-5 year olds and 6-12 year olds. Whatever the big kids can do, the smaller kids can too in their own area more or less.

The park seemed to be run pretty well, except for a couple of rides that were short-staffed and ended up with long wait times. In LL’s defense, there was only one ride that had an exceptionally long wait time, ‘Rogue Riders’; about 1hr 30min with no refuge from the sun.

The weather was beautiful, but as with any amusement park there’s a lack of shade so it’ll get hot later in the day. Fortunately there are a few ways to cool down. Around a few of the rides were holsters that can hold large umbrellas. (not on the line for Rogue Riders unfortunately). The umbrellas set up around some rides were very appreciated and stopped us from melting in the direct sun.

It’s not really a thrill-seekers amusement park like Six Flags, it’s more like a Thomasland; think of Legoland New York as a great day out with the family, relaxed atmosphere and a fun place to hangout for the day.

There’s fun stuff to do but clearly a few major attractions are missing when compared to the two larger Legolands’ CA & FL. No water park, aquarium, Lego Movie World, less rides and attractions. This will change, but one would think that with the amount of extra time they had to prepare in opening, that it would have amounted to more of a full-sized park out of the gate.

Legoland is very cute, limited rides and attractions as of yet but certainly some highlights. One of our favorite had to be the 4D movie which was only about 15 min long but super entertaining. Everyone in our group really enjoyed it. It’s also a great place to find some refuge from the heat. Shows run every hour on the hour all day long. No doubt they will add more shows, so stay tuned!

The Dragon is one of only two roller coasters at Legoland NY at this time. The Dragon is a really fun and face-paced roller coaster. Don’t let the size fool you, it’s fun! No loops but there are some very interesting twists and turns that keep it exciting. You need to be 4 years old and at least 42 inches to ride. There’s also a smaller roller coaster for the little guys, the Dragon’s Apprentice for kids 36 to 42 inches tall.

Driving School definitely makes the top 5 list of our favorite rides at Legoland NY. Geared for kids 6-13, there’s a generous space for the “City park” driving area that has turns, corners, street lights and signs, complete with dashed lines in the street. It’ll give the little ones a few minutes to drive around on their own. The line moves quickly too! By our count about 16 kids per group go in at once.

The best part is that the cars aren’t stuck to any track. The kids can freely drive around! But the caveat here is that the kids can freely drive around; which almost always leads to some bumper car action. There’s also a Junior Driving School for kids ages 3-5, they have their own smaller city section opposite the Driving School to burn rubber on.

Splash Battle had to be the most exciting time for our group. An 8 man crew can jump aboard and man the water cannon’s to engage the enemy pirate ships. Get ready because you’ll get soaked and be laughing the entire way through! This ride is absolutely a blast.

The boat travels and winds around the waterway passing by other enemy vessels on the water that you can blast away at. Bystanders also get to participate in the action; Around the perimeter of the body of water area mounted water cannons that you can use to ambush the ships as they pass by! This was so much fun and a great way cool off during a hot day. Not one bored face on this ride!

Miniland was the ultimate lego builders dream. The attention to detail and the sheer wow factor makes this attraction one you won’t want to miss. The Miniland area consists of 10 destinations including NYC and an homage to the town of Goshen. The Miniland displays are made up of approximately 22,231,368 lego bricks! We’ll have to take LL’s word for it. It’s truly impressive and a great place for family photos and selfies.

You’ll want to check out ‘The Big Shop’ Lego store before you leave. The selection of goods is huge and the prices aren’t inflated as far as we could tell. It’s fun to walk through and see all the available sets, very reminiscent of the Lego store inside Disneyworld.

It’s been a long wait but Legoland New York is finally here. Overall the experience was a pleasant one and we enjoyed the day out with friends and family. Prior to LLNY you had to travel to California, Florida or settle for a Legoland Discovery Center locally.

Unfortunately Legoland New York is a mere shadow of the California or Florida parks at this time. The pricing at $80 pre-purchase or $90 if you buy at the window is pretty steep. But it’s still an enjoyable day out with the family, convenient and close by.