Gigabyte Aorus Geforce RTX 2070 Super: Great Card If You Can Find One 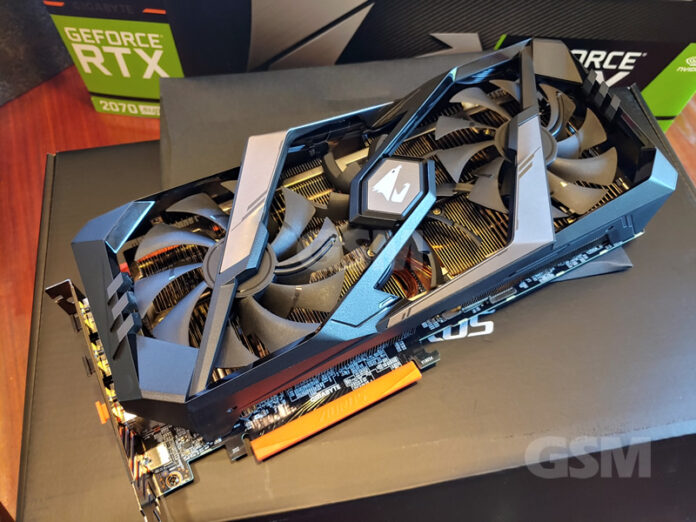 The Gigabyte Aorus GeForce RTX 2070 Super is a formidable video card capable of running many of the best games out there for PC today with style. The name Aorus doesn’t exactly roll off the tongue but you’ll quickly forget about that.

Building a gaming rig requires lots of comparison and consideration; For the sum of the components don’t always necessarily amount to the real world results. Let’s take a closer look at the Aorus Geforce RTX 2070 Super 8G.

A total of 7 video outputs allow you to achieve a quad array and though we don’t run this configuration, it’s nice to know you can. The video ports must be used 3xHDMI + 1xDP + 1xUSB-C or 3xDP + 1xHDMI + 1xUSB-C for your monitors without any adapters. It’s note worthy to know that you’ll need to reboot your system if you change the aforementioned configuration.

It’s a subjective thing, but we felt that aesthetically the Aorus RTX 2070 Super looks pretty damn slick. The card bezel or cover had angles like a stealth fighter but remains open for airflow. It should sufficiently deflect radar. Effectively it’s a three slot card but seems to seat well and doesn’t seem to need a video card brace or bracket to support the far end of the card.

The design is contemporary and gives a nice look if you’re running a case with glass like many of the pc cases have nowadays, especially with the LEDs lit. Initially there seemed to be some issues with the LED drivers that Gigabyte has for this card. The driver software didn’t control the LEDs very well. A Reddit discussion mentions to roll back to older nvidia video card drivers, set the color & pattern you want and then upgrade video card drivers. We opted to run the card without controlling the LEDs until such time suitable drivers were released. We’re pleased to report that the Aorus LED controller profile is operating properly and we are able to customize the LEDs.

Triple Windforce Stack which is Gigabyte’s cooling design that includes 3x 100mm fans equipped with double ball bearings to reduce noise. The two outer fans spin in one direction while the middle fan spins in the opposite direction. The alternating fan direction helps to eliminate any choppy or turbulent airflow. Turbulence can cause vibration, can cause uneven airflow so smoothing it out allows the fan design to create more efficient airflow. An angular fin design is supposed to increase cooling efficiency while also further reducing noise. The card is indeed relatively quiet.

If you overclock and/or you’re looking for near silent operation you may consider moving over to a liquid cooling solution for your GPU. For enthusiasts the card can be pushed further and overclocked to tweak out some extra performance.

Just remember the cardinal rule, “if you can’t afford to replace it, don’t overclock it”.

Even with the Triple Fan Cooling the running temperature range for these cards are higher. We see running idle temps 37-38 Celsius to 80 C when under gaming load.

Our performance reviews are based on our real world experiences. If you’re looking for benchmarks there are plenty of super techy sites out there that give you the nitty gritty on the 2070 Super. Your mileage may vary as you may have different hardware which can alter the experience. Our testing was performed using an AMD 3800x CPU, Asus x570-E Motherboard, 32GB of DDR4 Ballistics RAM, HX 850i Corsair Power Supply, Asus ROG Predator 27″ display with G-Sync support.

Our gaming rig doubles as a workstation so it’s imperative that the machine performs with stability for graphic design as well as gaming. The Aorus RTX 2070 delivers smooth, high-end performance at a price point that seems to be the sweet spot between performance and bang-for-buck. Top-shelf video cards can easily run up $800+ and even into the thousands so it’s important to know what you need the video card for before you drop a ton of cash on one.

Coupled with a G-Sync compatible monitor the results are stunning. Our testing was run with the 27″ Asus Predator with G-Sync running at 2560 x 1440 resolution. When playing FPS games like Fortnite or Crysis 3 the clarity of detail is impressive. You can see far into the horizon line with the detail of a Photo-realistic painting and the best part is there is little to no stutter. Occasionally we’ve experienced some hiccups but those are few and far between and we’ve not yet experienced any screen tearing or ghosting. All is well.

The card also performs quite well when pushed. Immersive VR and robust games require some engine power and the Aorus delivers. Popular games like Subnautica Below Zero VR run fantastic. So if you’re rockin VR hardware like the HTC VIVE Cosmos, HP Reverb G2, Valve Index VR the importance of detail and smooth performance is vital to perpetuating the illusion of reality. For fast-paced frame-rate demanding FPS games like Fortnite, Crysis 3, Battlefield V, Call of Duty Modern Warfare, the Aorus did not disappoint. Stutter-free smooth graphics performance keeps your reaction times as quick as your movement.

The Aorus GeForce RTX 2070 Super 8G is a top contender in the 2070 line. Our experience has been a pleasant one thus far. 2 years of smooth operation with the exception of the LEDs. The LED issue has ironed itself out along the way and LED controls are functional. If you can find one out there it’s still a great card to own.

You’ll have to decide what’s worth pursuing at this point. Prices for video cards are doubling, even tripling in price making it nearly impossible to obtain unless you have some money to burn.