Star Wars will never die and it’s immortalized ship the Millennium Falcon has surely earned it’s place in history the honor of being legofied again and again. The latest Force Awakens version is geared a little more for all age groups. The iconic vessel features Han Solo, Chewbacca, Rey, BB-8 Droid, Rey, Finn and Tasu Leech mini-figures to along with your adventures.

Designed for children ages 9-14 to play, with a little help and guidance, children of younger ages can also join the fun. The Falcon features a usable cockpit area for 2, spring load shooting turrets that rotate top and bottom. You even get a ramp and entrance hatch along with removable hull plates to play with. Additionally there are two spring loaded forward facing lasers that shoot the translucent red poles when you press the buttons near the front. The Falcon makes for a fun toy for boys. The top of the cockpit is a single hinged piece so the kids can open and close it without worrying that pieces will keep falling off. This isn’t as detailed a build as the Collectors Edition Millennium Falcon, it’s also not as expensive and is more appropriate for a wider age group.

Each LEGO mini-figure comes with it’s respective weapon of choice a trusty bunch of different blasters; Except Chewy of course, he’s got his stud-shooting bowcaster. The BB-8 droid is just a peg with a head really but still cool that he’s included.

A total of 1329 pieces are included in this latest iteration of the LEGO Millennium Falcon. What’s nice is that the entire upper section fans outward and exposes the interior so kids can easily get to the Holo chess board in the sitting area, cockpit, ramp etc. The Force Awakens Millennium Falcon 75105 variant, has been made with some larger parts that simplify the design slightly. At a reasonable $149.00 the latest Falcon makes for a great addition to the LEGO collection for the younger generations. The ultimate collectors edition 10179 Millennium Falcon (now out of production) contains a total of 5197 parts with 5 mini-figures but much more detail and functionality. 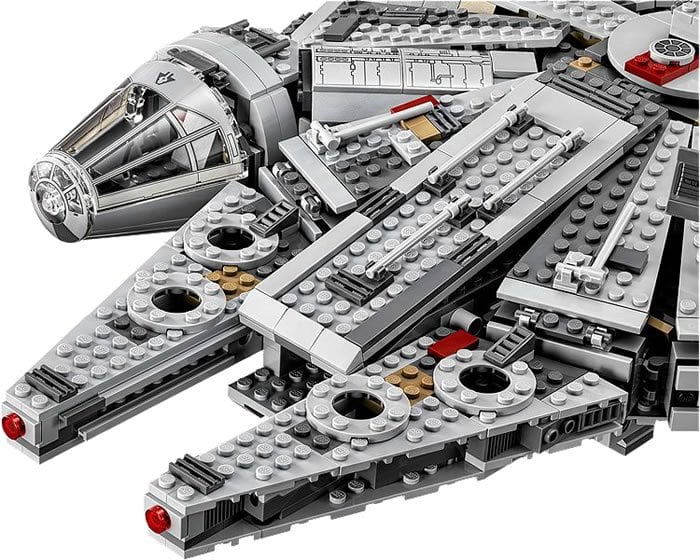 The LEGO Star Wars Millennium Falcon takes a few hours to assemble but a little more feasible to build as a Father Son project with younger kids. As children will develop at different paces, parents will need to determine if their young ones are responsible enough to play with it and if they should be supervised.

The Force Awakens Millennium Falcon makes a great Christmas / X-Mas Gift for kids of a wide age group and the streamlined new design makes it easier to play with for everyone. The set includes 7 mini-figures and the upper portion fully fans outward so you can play inside. The fully assembled Falcon measures over 5” (14cm) high, 18” (47cm) long and 12” (32cm) wide.

littleBits Avengers Hero Inventor Kit Review: The Stuff Heroes are made of