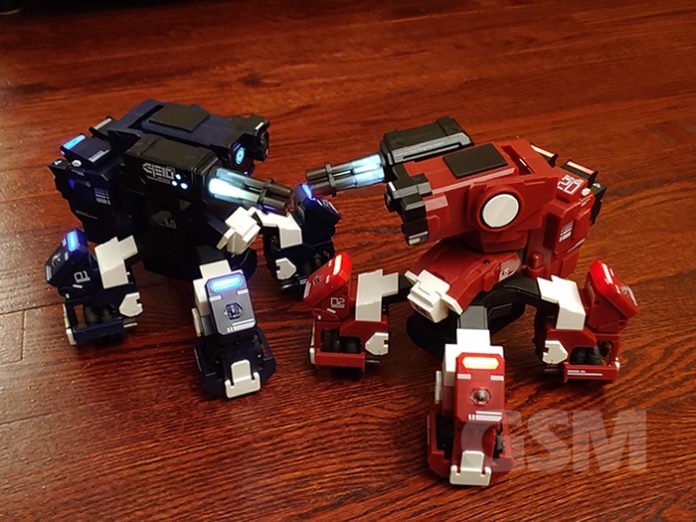 You’ve seen the TV show Robot Wars and you wish you could bring that fun home. The problem is that those robotic warriors cost a pretty penny to build. Engineering skills or at least some familiarity with robotics can be helpful.

Bring your First Person Shooter experience to the living room, office or anywhere there’s a smooth battlefield available. The GEIO battle bots are a great tension breaker for the office. Completely safe and lots of fun for kids and family at home too. Pop em out of the box, top off the charge on the battery and you’re good to go for some fast paced FPS combined with live robot action.

Quadcopters are great but the stress level when flying one can be exhausting. Crashes happen and often times your expensive drone will be in pieces. The GEIO Battle Robots are zero stress and lots of fun. You’ll never have to worry about crashing and your robots will live to fight another day.

GJS has provided us with the GEIO AR Battle Robots as a courtesy so that we could provide first hand review coverage of the experience and gameplay to our readers.

The GEIOs are great toys for big boys. Since this is AR based and there are no real projectiles, the robot is safe for any age to play with really. If you can tap around on an LCD screen you can play with the GEIO.

Our 6 year old boys are having a blast and the learning curve isn’t huge. The controls are easy to operate and function quite well on Android 5.0+ or iOS 11.0+ smartphones and tablets. Connecting via direct WiFi can be annoying but the process is relatively quick and painless. Controls on the UI are responsive and easy to use. The turret will auto-center when you let go of the turret control so it’s easy to tell which way is forward.

Engage in live action real-time battles played out in AR. Infrared sensors keep track of hits and remaining health. There are also 8 different modes for 1 or 2 players up to 4 person multiplayer.

Use the on-screen UI controls to steer, rotate, or move left, right, forward, backwards. You also have the option to lean on your accelerometer to steer.

Driving with the on-screen controls is easy enough but can be choppy as you can only go one direction at a time smoothly, aka not diagonally. While you CAN push ‘up’ and ‘right’ to go diagonally, it’s somehow slightly choppy compared to tilting and rotating to steer.

You’re able to play in First Person view or turn off the camera to save on battery. Visual LED indicators located on the robot and audible alerts allow you to see the hits and recognize when someone has won the round.

The GEIO robot features a Visual Recognition System that allows the Artificial Intelligence to recognize the OLED Modules that reside on the robot but also incorporates sensors to identify faces & power up totems too (included).

The onboard camera can visually identify defined objects from 50cm – 2m. The robot operates on a 5GHz band and can be controlled up to 70m away. The onboard camera provides only 640×480 resolution and can suffer from some blurriness and/or resolution issues in low light and when quickly moving the turret.

Movement is achieved with GJS’s patented chassis and 4 high-speed omni-directional wheels. The wheels are paired up, two per leg. They also have rubber that can rotate so lateral movements are just as smooth as forward and backward.

The robot is Plug & Play, there isn’t much to set up besides charging up the 2,000 mAh battery, installing the Android or iOS app and connecting to the GEIO via direct WiFi connection that the robot broadcasts. Play time measures about 40 min under heavy battle, about 60 min or so for less intense activities. Total charge time is approx 2hrs. It’s plenty of time for a few battles, general messing around and then some. 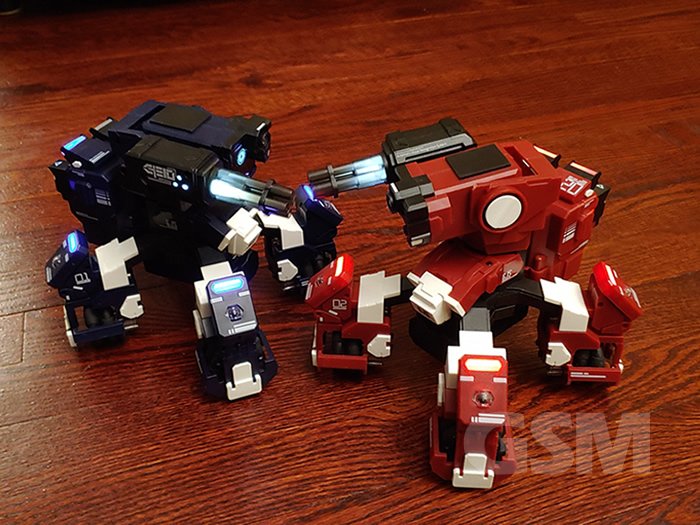 Gameplay is fast and furious. The GEIO’s are able to keep up with the action and provides  excellent fun-factor. The FPV screen can be turned off to save on battery or you can immerse yourself and sit in the cockpit of your mechanized fighter.

If you don’t have a buddy and a second GEIO to battle against you can bust out the single player and AR modes to play against virtual enemies with your living room or office as the backdrop.

The GEIO has a fully operational minigun on it’s side. The guns use Infrared to transmit shots. The guns are illuminated with an LED so when you fire the minigun you see it rotate and give off simulated muzzle flashes, very cool!

On the receiving end of things the GEIO is fashioned with electro-magnetic induction infrared receivers so it can keep of track of health & hits. The recognition seems fast and accurate.

The GEIO’s are sturdy and durable. Necessary since they are battle bots after all, so you can at times be crashing into one another or end up in a scrum of sorts.

Included in the box with each GEIO AR battle robot are 4 paper blocks that can be folded to create a triangle. Each side of the triangular object has a large icon printed on it that are power ups.

The turret mounted OLED module and visual recognition camera can identify the Power Up icons and provide enhancements throughout gameplay.

Power Ups include slowing down your opponent or reducing the RPM (rounds per minute), freezing them temporarily… a Flag for capture the flag games…

This thing is fast!

These aren’t your avg indoor robots or RC controlled vehicles, these things really move and they look really cool too! The GEIO is agile and has 3 speed settings. Each of the 4 wheels assembly’s have 2 wheels on it for omni-directional movement. Rubber coated segments rotate to keep the lateral movement fluent throughout gameplay.

The onboard camera makes it fun for single player FPV mode to explore and sneak up on someone. Our 6 year olds make it a family event and also their go to toy for some quick, fast fun.

On the upside the controller is your iOS or Android device so virtually anything can be modified or tweaked through the controller app/software. Additional game modes can be added and gameplay ultimately enhanced.

On the downside, using your phone as an RC controller often bleeds your batter out pretty quickly as they are connected directly via WiFi. If you don’t have a newer smartphone or tablet device that has Qualcomm’s Quick Charge 3 or 4 you’ll be stuck tethering or waiting for your phone to charge up too.

As with many RC vehicles, servos can go bad or be defective. One of our servo’s controlling the turret on our Blue GEIO went bad. It was squealing out of the box and then became less responsive, finally becoming completely inoperable. We also experienced issues keeping a solid connection to a 5Ghz network on this same robot. GJS replaced the blue bot for us and both turret functionality and 5Ghz connectivity have been flawless thus far.

The 640×480 camera can suffer from resolution issues that can be less than desirable when in low lighting situations.

The GEIO AR Battle Robots give exciting and fast-paced action right out of the box with No assembly required. These things are very quick & agile and provide plenty of battle time to blow off some steam with a buddy at home or at the office. They are well built and can take a little bump and grind with other battle bots. Great safe fun for young kids, teens and adults as well as the entire family. 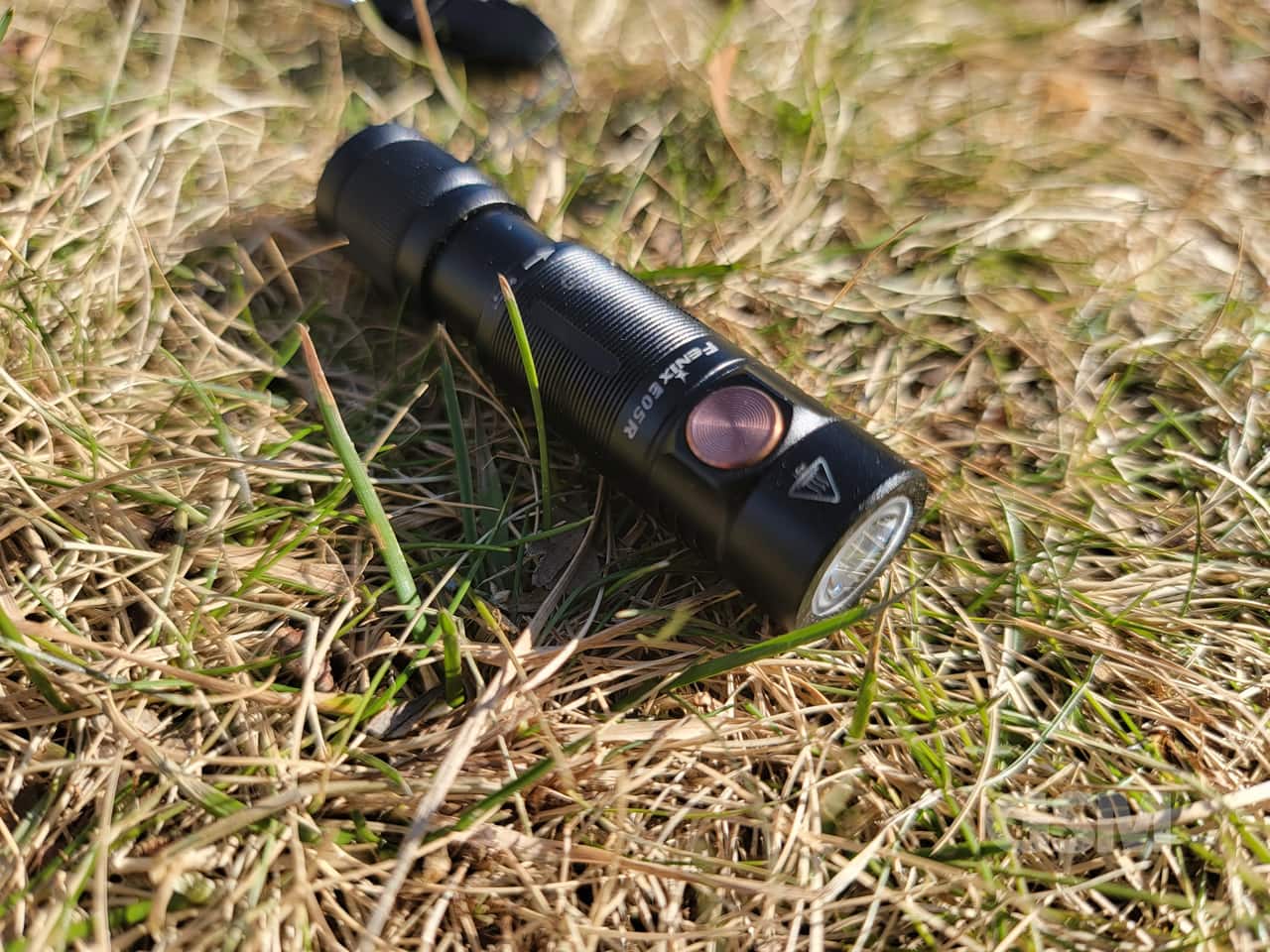 It's all about the Gear! Life, gear, style, home, product, showcases & reviews.