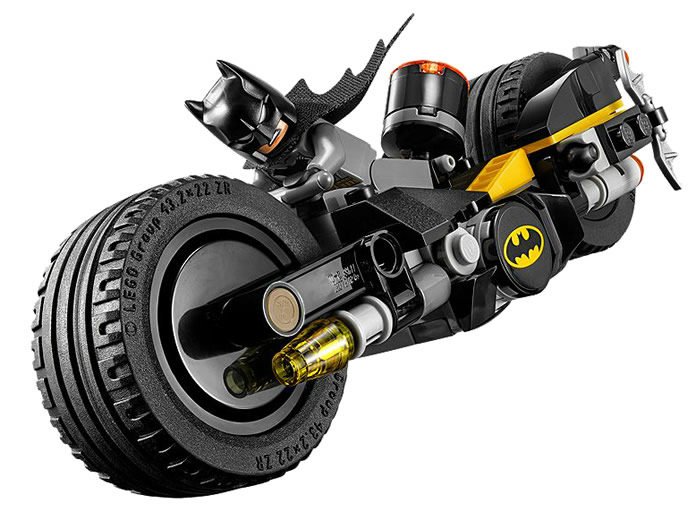 The LEGO set is categorized ages 7-14 but my 4 year old boys love it. They need a little supervision and help building them of course. Take heed as you will need to determine if your children are aware enough not to put the parts in their mouths as they can potentially be a choking hazard, hence the 7-14 age group categorization.

Batman comes with a Black Cape and Helmet with Grey Body which my children seemed to love. The new cape seems a bit more durable than some of the other capes we’ve gotten in other sets. The Bat Cycle is sizable and can be played with fairly well without sending tiny pieces all over the place. The wheels are made of real rubber and are wide so it makes it easy for the kids to play with and allows the motorcycle to stand on it’s own. Batman is supposed to lay face down but can be slightly difficult to get the hands to grip the handle bars for little ones but can easily be modified so that you can make Batman sit instead. The rear of the bike has to rotating arms on either side that hold the baterang and grappling hook gun accessories. The rotating arms  attach via a ball so they can be rotated in virtually any angle you wish. Each of the arms has a neat little gun that shoots the small round translucent dots and works very well; clever design. Be aware that you may not want smaller children to use this, or even larger children as the pieces will shoot with good velocity and can get lost easily.

Harley Quinn’s motorcycle is slightly shorter with a smaller rear tire and rotating exhaust pipes that kids can pretend are shooting; the exhaust pipes only rotate in a semi-circle and do not have any shooting action. She sits in a traditional position and handle bars extend sufficiently so it makes it a bit easier to get her hands on the bars. Included is Harley Quinn’s weapon of choice her hammer with holster attached to the motorcycle which you can rotate around or outward as you like. The hammer can also be removed and placed in her hand.

The additional Deadshot character includes a jetpack and bazooka weapon that also has a stud shooter like Batman’s motorcycle. The added character is a nice addition and the boys seem to love an additional villain.

Part of the LEGO DC Comics Super Heroes collection, the LEGO Batman Gotham City Cycle Chase LEGO set is value packed and includes two motorcycles, Deadshot, Harley Quinn and Batman for only $19.99. The set is geared for the 7-14 year old age group but with some guidance and possibly omission of the stud shooters can be fun for slightly younger ages to play with as the motorcycles are built well and won’t fall apart in your hands while playing with them. I highly recommend it.

littleBits Avengers Hero Inventor Kit Review: The Stuff Heroes are made of