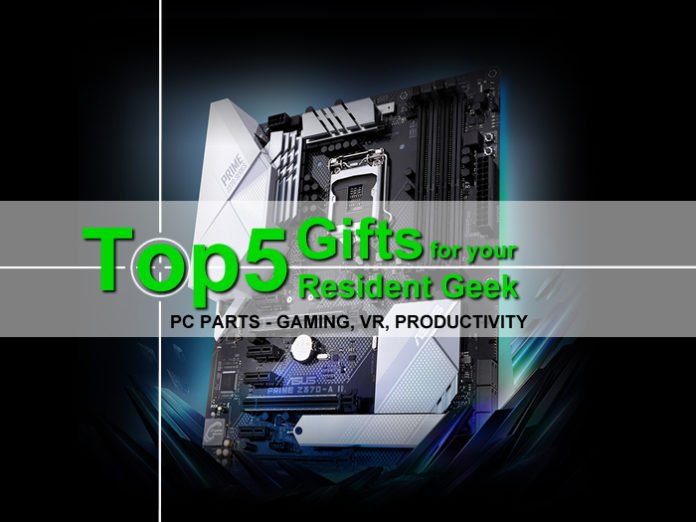 We’ve all got one, we all need one, your resident computer geek. We live in the age of technological innovation so we’re all geeks at heart really. Next time your computer is on the fritz, infected by a virus, need to immediately know why the printer won’t connect to the WiFi, need them to back up your smartphone photos, update your computer…

Rather than hit them up for another round of support, instead consider brightening up their day with one of our Top 5 computer parts. These great PC components for gaming, Virtual Reality and productivity will make YOUR resident geek love you just a little more. Check out some of these great choices for PC gaming computer parts.

SSD or Solid State Density hard drives are lightning quick in small form factors. The problem is that when the technology first came out the prices are rediculae, hd capacities were tiny and out of reach for most price-wise. The Samsung’s 2.5 inch form factor QVO SSD line up brings the prices down to the level of traditional mechanical drives. The 860 QVO for a 1TB starts at an affordable $149 and a 2TB at $300.

Showing off your gaming hardware has become a calling card for gamers and nothing says I’m a gamer more than some liquid cooling and LED lit hardware. Dressing up your gaming rig is all part of the party and Kingston has unleashed the new RGB Predator line of DDR4 RAM because why not? These guys look slick with their custom cut heat spreaders and LEDs. Sit back and enjoy. Thankfully DD4 memory is significantly more affordable than DDR2 modules of the past so load it up, as much as you can get. You can never have too much RAM!

What works for PC doesn’t always work for Mac, or does it? MacBook Pro and PC laptop users alike can make things a little more convenient at the desk with the Universal SD5200T Docking Station. Don’t be confined to a tiny laptop screen, use it like a tower. The Kensigton SD5200T makes it easy to set up camp at your desk to extends functionality to enhance your desktop experience and detaches from quickly when you’re on the go.

The SD5200T Thunderbolt 3 Dock Station is rated to give you blazing transfer speeds of up to 40Gbps and 85W of pass-through power delivery for up to two 4k displays or a single 5k display, along with all your peripherals. The universal dock is driver-less and cross-platform compatible so you need not worry if you have multiple mac/pc’s in your home. (You’ll need an adapter for dual 4k video output.)

A frontside USB 3.0 / 2.1A Fast Charge port and USB-C 5Gbps port are available for convenience. On the rear are a USB 3.0 port, and two USB-C ports: 1 uplink port 85W and a second that you can Daisy-Chain peripherals or hard drives from. A DisplayPort++, Gigabit Ethernet, Power supply port and 3.5mm mic/headphone jacks round out the connections. A VESA Zero footprint display mount is available for purchase separately.

If you want to bust into VR with the likes of an HTC Vive Pro headset or are interested in smooth 4k gameplay you’re gonna need some graphics firepower. Video cards are at the heart of gaming and Bitcoin mining if that’s your thing. The GeForce RTX 2080 XC GPU’s score near the very top of benchmarking numbers and nearly 1/3 less than the Ti bleeding edge cards.

The RTX 2080 XC is cooled by iCX2 dual high-speed fans for a 14% cooler and 19% quieter experience than previous models. Comes with customizable trim color and is RGB LED lit in and takes up two card slots on your tower. Comes with a 3 Year Warranty.

Looking for a solid Intel based motherboard for gaming but really don’t want to drop 5 hundy on a board? The Asus Prime Z370-A II features an 1151 Intel socket for the latest 8th and 9th Generation iCore CPUs. The full size ATX motherboard is packed with functionality and features most all of the gravy you’d come to expect in a high-end board without the high-end price.

Asus has been around the block a few times and provides excellent BIOS software that supports Overclocking if you’re all about pushing the limits of your hardware. 4 X 288 pin DDR4 slots with a maximum 64GB of support provides a nice high ceiling for your short term memory. Since SATA HD speeds have become a bottlenecking point, the Z370-A II also comes with the all important 2x M.2 connections for NVMe SSD hard drives, support for Intel Optane, SATA RAID 0/1/5/10 and Thunderbolt 3 port.

Not backwards compatible with older LGA 1151 socket CPUs, comes with a 3 Year Limited Warranty on Parts and Labor.

So the next time you give that call for that never ending tech support from your resident geek, rather than unfold another mess in their laps, surprise them with a PC part that they can upgrade their gaming rig with, they’ll love you for it!